In this process, import duties with conditional payment obligation (guarantee) are assessed, the identity of the goods is verified, a deadline is set and possible non-customs provisions are applied.

For goods coming from the EU or which have already been cleared for import in an EU country (community goods), a so-called T2 is issued. This is the case, for example, when a truck coming from Germany passes through Switzerland on its way to Italy.

A T1 is issued for non-Community goods such as goods from Switzerland or Norway. The T1 is also issued for goods from third countries which, for example, arrive at the import destination from overseas through a sea port without customs clearance. Example: Foreign goods coming from Rotterdam and delivered directly to the company domicile by ship must be transported using a transit procedure (T1).

In addition, there is the national transit procedure InTV as a purely Swiss procedure. National transit is issued only for Switzerland internal transports, such as between two authorised consigners, from the consignor or bonded warehouse to a Swiss airport, or from the external border to an authorised consignee within Switzerland. Example: If goods are declared for export at the domicile, the goods that are no longer in free circulation must be declared for transit procedure.

Any transit procedure opened in NCTS can be carried out at any customs office. Transit documents (e.g. T19 are additionally stored under the corresponding MRN (Movement Reference Number) in an EU database, which allows any interested party to determine when the shipment:

The customs participant always reports to the customs authority of the country where the transit is opened or completed.

The NCTS system is mainly used for transit goods in road transport and is mandatory for international transit. The transit procedure is carried out electronically.

This does not apply to transport carried out under the simplified procedure by rail, air, sea or pipeline.

First, the shipment data is transmitted to customs. Any possible inspections are transmitted to the declarant together with the confirmation of acceptance. Multiple consignments can now be combined as a groupage and transmitted as a transit declaration. The corresponding transit accompanying document, which replaces the T-document, is immediately returned to the carrier in PDF format. The Authorised Consignor can now immediately dispose of the shipments and send the truck on its journey with the transit accompanying document.

In Switzerland, the export customs declaration has also been integrated into the NCTS procedure. This allows export declarations to be made together with the transit declaration without having to enter data several times. This can be done in one or two steps.

In the one-step procedure, the customs declaration for export is transmitted first, and its data is used for both the export and transit procedure. 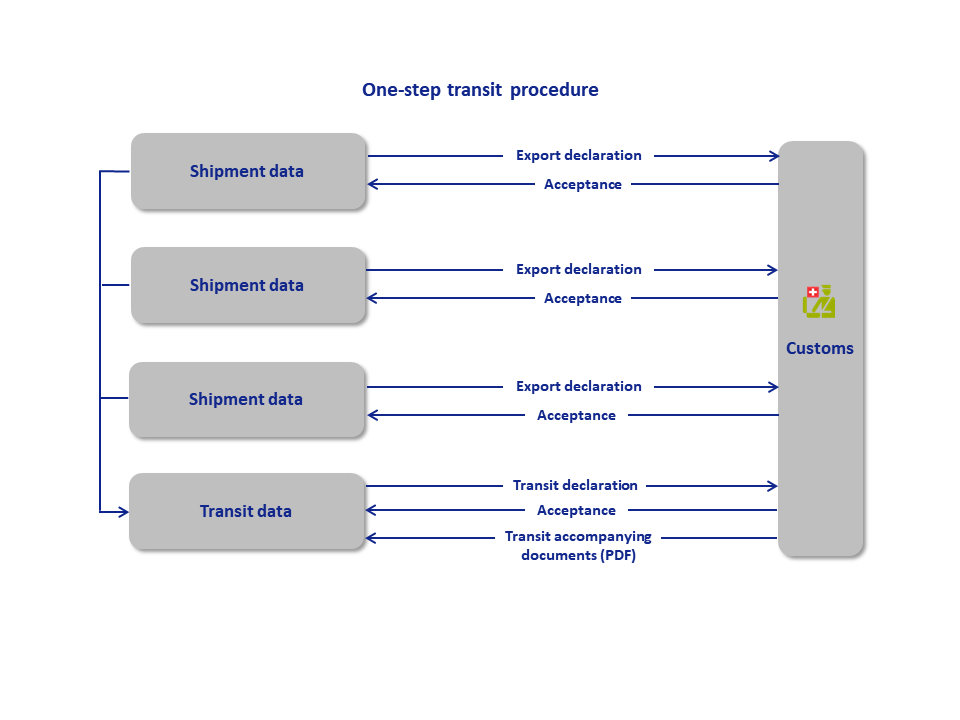 The two-step procedure may only be used by an authorised consignor. In this case, the shipment declaration for transit procedure is transmitted first. This requires only basic data. Data for the export customs declaration must be submitted then within 24 hours 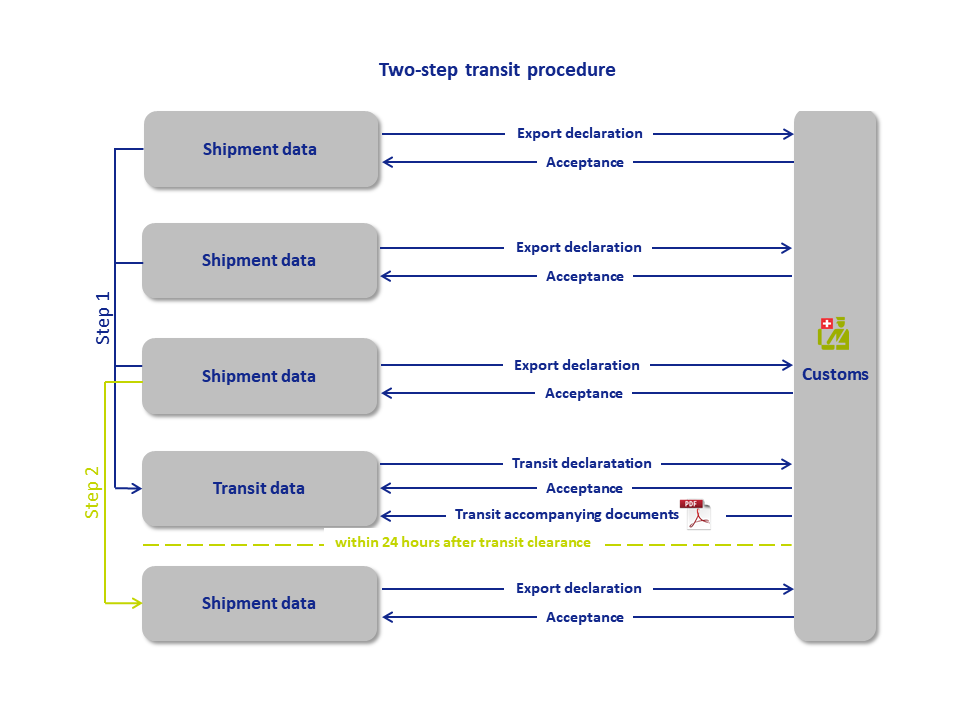 Upon arrival of a truck at the Authorised Consignee, the transit documents must be submitted to customs in a notification of arrival.

An unloading permit is then returned, after which the carrier may unload the shipments from the truck. Conformity or any discrepancies must be reported in detail in an unloading remark (Abladebemerkung) within 24 hours