At first because I didn't think I was very good at that kind of thing. And when I read the many stories from my colleagues, which were so beautiful and never simple or trivial, I didn't know what to say more than ever.

But in these (hopefully) only a few days that separate us from a "new normality", I think one important thought came up during one of the many work meetings with some of the colleagues where we talked about how these past two months had been working from home: "We've done a really good job". It was two months during which the physical distance from the office, the difficulties and hardships that had affected the lives of each of us in general, could have pushed us further away and caused us to be less and less in touch with each other, to the point of going through our own " blind alley " and very easily blaming the problematic situation that affected everyone.

Instead: no. It did not.

What happened was that we all worked hard, we all stuck together to work together in the best possible way.

In one of the home stories I read that this time was also an opportunity to get to know ourselves better. This is true. That's how SISA is: people who, when they are in difficulties, do not find a justification for slowing down, but rather a motivation to move forward better than before and to discover new points of view and strategies.

I remember that during several Avanti meetings "communication" emerged as a point that needs to be improved between us. I think that in these two months we were able to communicate perhaps even better than in the office, with more patience, understanding and attention to those who saw us in a small box on their monitor and were aware of the difficulties due to the distance. This is what SISA is: people who know their limits and try to turn them into strengths to improve themselves.

I believe that it is a valuable form of respect to have worked hard and done a good job during this time, not only towards our customers and towards our colleagues, but also towards the many people who, due to the nature of their work or for other reasons, could not/must not work and were forced to inactivity.

SISA is not just the Gewerbestrasse, Via Carvina or the home of each of us. These are only places. SISA is the people who work together; people who are also proud; but a healthy pride that comes from values that we have sought and made our own. People also with their own character (and who has not?), which can sometimes get nervous, but when it happens it is only because of the awareness that a job can be done better and the will to do it better.

I miss all my colleagues. The wish to return and see each other again personally in the office is as great as the wish to travel again. I also miss not being able to see Berlin again soon; the borders are still closed. At the moment we are happy with a somewhat improvised beer garden behind our house. The only thing missing is the television tower to climb into the sky. But not to worry, a few clicks on Teams, you set a personal background and there I am on the phone from my office at Alexanderplatz 7, Stadtmitte, Casnate with Bernate. 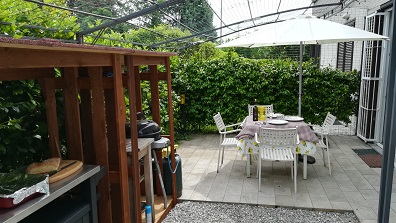 My home was my office